The deep depression in the Arabian Sea has intensified into a cyclonic storm and will cross the north Maharashtra and south Gujarat coasts on June 3, the India Meteorological Department (IMD) said on Tuesday.

As cyclone Nisarga is expected to hit Mumbai, Thane and other parts of Maharashtra tomorrow, the National Disaster Response Force (NDRF) has placed 10 teams on standby, while the Mumbai Police have started relocating the homeless to temporary shelters.

The Brihanmumbai Municipal Corporation (BMC) has kept its disaster management control room and all necessary departments on high alert. All 24 ward offices have been ordered to relocate people living in flood-prone areas to nearby schools.

Here are the latest updates:

Navy teams on stand-by in Mumbai

The Western Naval Command has put all its teams on alert and is ready to respond to cyclone “Nisarga”, a defence spokesperson said on Tuesday.

The cyclonic storm is likely to intensify and cross the coast of Maharashtra and south Gujarat on Wednesday as per the India Meteorological Department (IMD).

The Navy has has kept five flood teams and three diving teams on stand-by in Mumbai, the official said.

These teams, trained and equipped for rescue operations, are stationed at various naval areas across Mumbai and can provide early response over a larger area, he said.

A recce of known flood-prone areas has been undertaken and all necessary preparations are in place. Similar arrangements have been set up within the Karwar Naval Area, Goa Naval Area as well as Gujarat Daman and Diu Naval Areas, he said.

A platform of prominent Durga Puja organisers of Kolkata has reached out to the cyclone Amphan-affected ‘shola’ (Indian cork) artists of a hamlet in South 24 Parganas district, who have been decorating their pandals with intricate artworks for years.

The Forum for Durgotsab, a platform of 350 Durga Puja committees, on Tuesday said its members distributed food and relief material to 170 families of artisans of Enayetpur village in Diamond Harbour subdivision of the district.

Seven-eight members of the Forum went to Enayetpur and distributed dry food items, soap, tarpaulin and other items among the affected families on Monday, he said.

The Forum has puja committees such as Ballygunje Cultural, Behala Notun Dal, Tridhara Sammilani, Santoshpur Lake Palli, Hatibagan Navin Palli and Kasi Bose Lane. They are known for organising pujas that attract a large number of visitors every year.

The Naktala Udayan Sangha, an award-winning puja committee of the city, will separately distribute relief materials among people in several storm-ravaged villages in an area close to the Sunderbans, the worlds largest mangrove forest.

Many other Durga puja organisers of Kolkata are also individually collecting relief material for the people in the disaster-hit zones.

COVID-19 patients shifted from BKC to Worli as precautionary measure 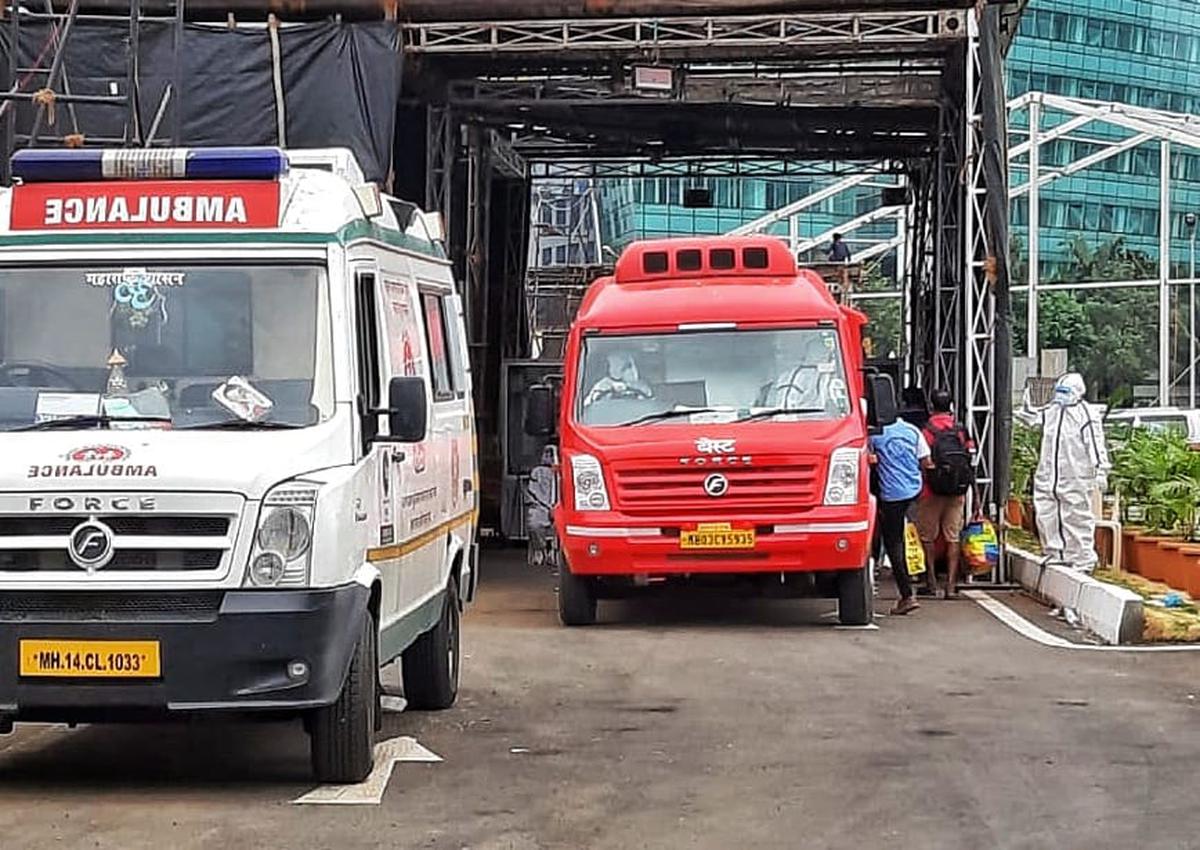 As Mumbai is bracing up to face cyclone Nisarga, nearly 250 COVID-19 patients are being shifted from the facility at Bandra Kurla Complex (BKC) to the COVID centre at the NSCI Centre in Worli.

The MMRDA’s Bandra Kurla Complex facility is a field hospital that has been built under a German Tent, while the NSCI facility is within a massive indoor stadium.

The MMRDA has stated that the BKC COVID-19 hospital could sustain strong winds of up to 80km-100km per hour, but the move was taken as a precautionary measure and they were also taking adaptive measures to strengthen the facility. – Ajeet Mahale

The cyclone has been named ‘Nisarga’ The name has been proposed by Bangladesh, Mr. Mohapatra said.

It is likely to turn into a ‘severe cyclonic storm’ by Tuesday night, the Cyclone Warning Division of the IMD said.

Prime Minister Narendra Modi took stock of the situation in the wake of cyclonic conditions in western India.

“Took stock of the situation in the wake of cyclone conditions in parts of India’s western coast,” the prime minister tweeted.

“Praying for everyone’s well-being. I urge people to take all possible precautions and safety measures,” he said.

Over 20,000 people to be evacuated from Gujarat

With Gujarat bracing for the approaching cyclonic storm ‘Nisarg’, the Valsad and Navsari district administrations have started evacuating nearly 20,000 people from 47 villages located close to the State’s coastline.

As a precautionary measure, the district administrations of Valsad and Navsari have started shifting people living near the coast to safer places.

“We have deployed our teams to shift nearly 10,000 people living in 35 coastal villages. We have already identified shelter homes and started the evacuation process,” Valsad Collector R R Raval said.

In adjoining Navsari district also, the administration has initiated the process of shifting some 10,200 people from 12 villages, Collector Ardra Agarwal said. – PTI

Thirty-three NDRF teams have been deployed in the coastal districts of Maharashtra and Gujarat in view of the impending Cyclone Nisarga, the chief of the federal contingency force said.

In a video message, NDRF Director General (DG) S N Pradhan said, “Gujarat and Maharashtra have 11 and 10 teams respectively and they are being deployed in the coastal districts facing the Arabian Sea“.

On Gujarat’s request, five more teams are being airlifted to the state from Punjab, he said.

13 fishing boats from Palghar still in sea as cyclone nears

As Maharashtra prepares for the approaching cyclone, 13 boats of fishermen from Palghar are still out in the sea and efforts are being made to get them back to the shore quickly, authorities said on Tuesday.

As many as 577 fishing boats from Palghar had earlier gone out in the sea and till Monday evening, 477 returned, Collector Kailas Shinde said.

Efforts were made to bring the remaining 100 also back to the shore. “Now, only 13 boats were left out in the sea,” Mr. Shinde said.

The number of fishermen on these boats was not known.

The district administration is taking help of the Coast Guard and officials of the fisheries department to get the remaining boats back, Palghar’s disaster management cell chief Vivekanand Kadam said.

Alert sounded in many rural parts of Pune district

While the risk from Cyclone Nisarga to Pune district may be relatively low as compared to Mumbai city and districts in the Konkan division, a number of tehsils in the district’s rural parts have been placed on ‘high alert’, said authorities on Tuesday.

Ayush Prasad, Chief Executive Officer (CEO), Pune Zilla Parishad, said that immediate preventive measures were being taken to ensure that there was no loss to life and minimal damage to property.

Very likely to intensify into a severe cyclonic storm: IMD

Since it will recurve and cross north Maharashtra between Harihareshwar and Daman, close to Alibaug on Wednesday afternoon, IMD has already issued a red alert for Mumbai.

Besides, IMD has issued a storm surge warning for Mumbai: “Storm surge of 1-2 meters above astronomical tide is very likely to inundate low lying areas of Mumbai during the time of landfall”. IMD has issued warnings as it expects major damage to huts, roof tops may blow off, unattached metal sheets may fly, damage to roads, power and communication lines, breaking of tree branches.

Even as IMD has not specified where the cyclone will make a landfall, Mahesh Palawat, vice president, meteorology and climate change at private forecaster Skymet Weather tweeted on Tuesday morning, “Now #CycloneNisarga seems to head north of #Mumbai, towards #Palghar and #Dahanu. #Mumbaikars to brace up for very heavy #rains and gale force winds. Crucial time is between evening of June 2nd and afternoon of June 3rd.”

IMD has also issued a storm surge warning for Mumbai. “Storm surge of 1-2 meters above astronomical tide is very likely to inundate low lying areas of Mumbai during the time of landfall.”

IMD has issued warnings as it expects major damage to huts and roof tops being blow off. Unattached metal sheets may fly and damage to roads, power and communication lines is expected. There may be breaking of tree branches too.

Even as IMD has not specified where the cyclone will make a landfall, Mahesh Palawat, Vice President, meteorology and climate change at private forecaster Skymet Weather tweeted on Tuesday morning asking Mumbaikars to brace up for very heavy rains and gale force winds.

7 districts in south Gujarat, 2 in Saurashtra region put on alert

Seven districts in south Gujarat and two in Saurashtra region have been put on high alert with the deployment of 11 National Disaster Response Force (NDRF) teams to deal with cyclonic storm Nisarga which has formed in the Arabian Sea.

The State authorities have asked fishermen to avoid venturing into the sea while all beaches have been closed for public.

The India Meteorological Department (IMD) on Monday scaled up its weather warning, issuing a red alert for Mumbai, Thane, Palghar and Raigad for Wednesday. There is a red alert for Palghar on Thursday as well.

On Sunday, a low pressure area formed over south-east and adjoining east-central Arabian Sea in the early morning and remained till forenoon. Fishermen bring their boat anchor back in shore at Badhwar park in Mumbai on June 2, 2020. Fishermen have been instructed not to venture in Arabian sea due to approaching cyclone.
| Photo Credit: Vivek Bendre

Union Home Minister Amit Shah held a video conference with Chief Minister Uddhav Thackeray on Monday regarding cyclone Nisarga. Mr. Shah clarified that disaster response teams from neighbouring states have been kept on alert and will be sent to Maharashtra if needed.

In anticipation of a cyclonic storm making landfall on the Gujarat coast on June 3, the Gujarat government on Monday ordered evacuation of people living in low-lying areas and deployed 10 teams of the National Disaster Response Force (NDRF) in over half a dozen districts.

“The (low-pressure) system is around 900km away from Surat at present. We expect the cyclonic storm to hit the southern Gujarat coast near Daman on June 3 evening with a wind speed of 90 to 100 km per hour. It will bring heavy rainfall in the south Gujarat region on June 3 and 4. It may have some impact in Bhavnagar and Amreli districts of the Saurashtra region as well,” said Director of MET Centre, Jayanta Sarkar.

Commenting on the situation after June 4, Akshay Deoras, a Ph.D scholar at University of Reading, U.K., who follows India and especially Maharashtra’s weather, tweeted, “From 4 June, normal #weather conditions (mostly clear sky & humid weather) will make a comeback in #Mumbai. This period will witness at the most a few odd passing pre-#monsoon showers. It will be surprising if the #monsoon’s arrival in #Mumbai is announced before ~15 June. The Arabian Sea low-pressure system will lead to a transient rainfall phase, but surface/near-surface wind pattern won’t be westerly so as to declare the monsoon’s arrival. I’d like to cite the case of Cyclone Vayu which didn’t allow the onset of westerly surface/near-surface #monsoon winds over #Mumbai for a long period around mid June 2019. Due to the same reason, @Indiametdept had waited for many days for announcing the monsoon’s arrival.”