The year 2019 has seen the release of big-budget period action films and all of them have been well received by the audiences, like MANIKARNIKA – THE QUEEN OF JHANSI, KESARI and SYE RAA NARASIMHA REDDY. Now the final 2019 film in this league, PANIPAT, is all set to release, and it promises to be a grand and entertaining affair. So does PANIPAT manage to give the audiences a great time? Or does it fail? Let’s analyse. 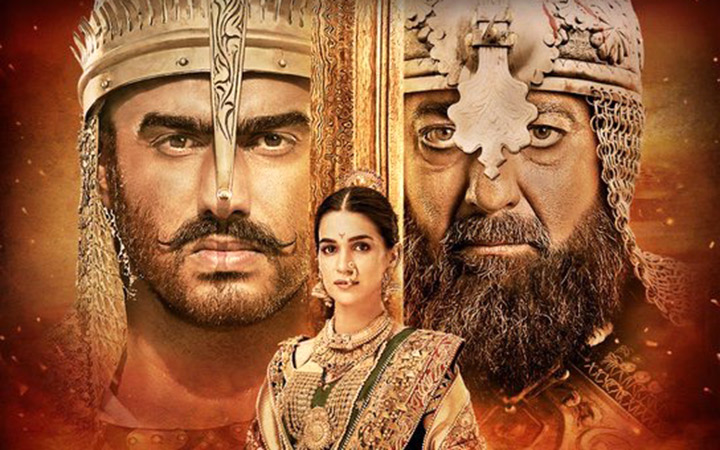 PANIPAT is the story of one of the most important chapters of history. The year is 1760. The Marathas under Sadashivrao Bhau (Arjun Kapoor) finally annexe the Udgiri Fort in present-day southern Maharashtra and thereby finish the Nizamshahi rule for good. The Marathas have now occupied most of India. Nana Saheb Peshwa (Mohnish Bahl) is very happy with the developments and especially with Sadashiv. Nana Saheb’s wife Gopika Bai (Padmini Kolhapure) however feels insecure with her hubby’s fondness for Sadashiv. At her insistence, Sadashiv is given the responsibility of handling the treasury. Sadashiv is shocked at this development as he has always been a warrior. Nevertheless he accepts this change of duty. He also gets to spend time with Parvati Bai (Kriti Sanon), a physician. Both fall in love and get married. Meanwhile, while checking the finances, Sadashiv realises that the kingdoms up North are not paying the dues to the Marathas, as they had promised. A message is then sent to all these kings, including Mughal empeor Alamgir II (S M Zaheer). Najib-Ud-Daula (Mantra) is a part of the Mughal court and he’s asked to leave. He’s so frustrated with the high handedness of the Marathas that he decides to defeat them once and for all. To do so, he knocks on the doors of Ahmed Shah Abdali (Sanjay Dutt), the Afghan ruler of Kandahar. At first, Abdali declines since he realises that Najib-Ud-Daula is seeking his help for his selfish gains. But then he also realises that if he manages to capture a large part of India, it would add to his prowess. Hence he sets off to India. The Marathas find out about Abdali’s plans and that he is approaching with 1 lakh soldiers. Sadashiv however feels that despite having lesser number of soldiers, the Marathas can still defeat Abdali. Nana Saheb gives Sadashiv the responsibility of going up North to stop Abdali with 40,000 soldiers. On the way, Sadashiv seeks help from various kingdoms and forges alliances. Most of them agree to be on his side and provide armymen. Shuja-Ud-Daula (Kunal R Kapoor) is the Wazir of Awadh and Sadashiv asks for his help as well. In return, he agrees to make him the Wazir of Delhi once Abdali is defeated. Shuja-Ud-Daula asks for this agreement in writing. The Marathas agree to do so and said that they’ll return in a few days with the written assurance. In the interim, Abdali’s men meet Shuja-Ud-Daula. They too make the same offer that he’ll be made Delhi’s Wazir and what’s more, they get the written agreement with them. Shuja-Ud-Daula hence joins Abdali. This serves a blow for Sadashiv since Shuja-Ud-Daula’s alliance would have helped him immensely. Nevertheless, he agrees to fight, come what may. What happens next forms the rest of the film.

Chandrashekhar Dhavalikar, Ranjeet Bahadur, Aditya Rawal and Ashutosh Gowariker’s story is close to reality. It is praiseworthy that Gowariker and his team chose this topic as it’s one of the significant battles of Indian history. Also, many viewers would not be aware that the Marathas at one point were so strong in India. Hence, it turns out to be an entertaining as well as enlightening experience for them. Chandrashekhar Dhavalikar, Ranjeet Bahadur, Aditya Rawal and Ashutosh Gowariker’s screenplay is fine for most parts but is not consistent. A few scenes don’t pack a punch and hence, bring the impact down. A few scenes however are exceptionally written. Ashok Chakradhar’s dialogues are nothing great.

Ashutosh Gowariker’s direction is neat and uncomplicated for most parts. He’s in form after a long time. He very beautifully presents the Maratha Empire in all its glory. The battle scenes in the second half keep the interest going. Also noteworthy is the scene of the truce between Sadashiv and Abdali. But the politics and the problems faced by Marathas in getting help in battling Abdali ought to have been better explained. Also, the film could have been more commercial and massy as there were several scenes that had that kind of appeal. The length is another issue. At 2.53 hours, the film is quite long, especially in the first half. Another big problem with the film is that the tagline is ‘The Great Betrayal’. This bit comes out in a crucial scene in the climax. But the build up to it is very weak. Hence, audiences don’t really get a shock when the man who does the ‘great betrayal’ shows his true intentions. Hence, the impact gets diluted.

PANIPAT begins on a fair note with the scene of the Udgiri Fort annexation. The film then falls a bit as the focus shifts to the politics happening within Shaniwar Wada, Pune. Also, the romantic track of Sadashiv-Parvati Bai is decent but nothing extraordinary. The entry of Abdali is quite interesting and it enhances interest. The film dips once again and the interest then only rises during the intermission point. This is an excellent sequence, when Sadashiv and Abdali come face to face and it sets the mood of the second half. The post interval portion starts off well as Sadashiv comes up with a great plan of capturing Delhi’s Red Fort. This sequence is quite significant, also because viewers might not be aware of this chapter of history. Ashutosh Gowariker however reserves the best for the finale. The truce sequence followed by the 30-minute-long climax engrosses viewers. The betrayal bit however could have been better explained. The final scene of Abdali is fine and it is a great way to end the film.

Arjun Kapoor gives his hundred per cent. His physique comes in handy for this character and he indeed looks like a ferocious warrior who can induce fear in enemies. In non-action scenes too, he is quite good. But in a few scenes, he’s a bit off. This is especially in the romantic portions. Sanjay Dutt too tries his best to be menacing but succeeds partly. A fine effort, nevertheless! Kriti Sanon is quite confident and gives an impressive performance. She is not there in the film for the heck of it. She has a very important part and her action scene would be loved! Mohnish Bahl is dependable but he’s hardly there in the second half. Sahil Salathia (Shamsher Bahadur; Bajirao and Mastani’s son) leaves a tremendous mark and it’s great to see that he got such an important part. Same goes for Nawab Shah (Ibrahim Khan Gardi). Mantra understands his character and brings the require jealousy and immaturity. Zeenat Aman (Sakina Begum) is excellent in the cameo and her scene with Kriti Sanon is one of the highpoints of the film. The other actors who do a good job are Padmini Kolhapure, Kunal R Kapoor, S M Zaheer, Milind Gunaji (Dattaji Shinde) Abhishek Nigam (Vishwas Rao), Ravindra Mahajani (Malhar Rao Holkar) and Suhasini Mulay (Sadashiv’s grandmother; presumably Radha Bai).

Ajay-Atul’s music is a big letdown. None of the songs are memorable. ‘Mard Maratha’ is shot well but the song is very dull. Same goes for ‘Mann Mein Shiva’. ‘Sapna Hai Sach Hai’ lacks soul. Ajay-Atul’s background score is way better and exhilarating.

Muraleedharan C K’s cinematography is spectacular and captures the battle and other scenes effectively. Raju Khan’s choreography is worth appreciating in ‘Mann Mein Shiva’. Nitin Chandrakant Desai’s production design, as expected, is grand and visually stunning. However, some sets seem too similar to that of JODHAA AKBAR [2008] and PREM RATAN DHAN PAYO [2015]. Neeta Lulla’s costumes are quite authentic and in sync with the bygone era. Vikram Gaikwad’s makeup and hair design is very detailed. Abbas Ali Moghul’s action makes for a great watch and is sans gore or too much of bloodshed. VFX is done by Ashutosh Gowariker’s company (AGPPL VFX) and is fine in most scenes. The slow-motion shots in climax fight adds to the impact. Steven Bernard’s editing could have been tighter.

On the whole, PANIPAT throws light on an important chapter of Indian history with the battle scenes as its USP. At the box office, it will need a strong word of mouth since it faces competition in the form of PATI PATNI AUR WOH.